Kelli, the Cajun Dane (http://madsandkelli.blogspot.com/) recently discussed the lesser porcelain goddess, the bidet. It is fairly hilarious for so many reasons, but it got me thinking about plumbing in so many ways. As a highly privileged American, I have had the luxury of indoor plumbing for most of my life, with the exceptions of camping trips as a boy scout and young adult seeking adventures in the more remote places of the western U.S.
When the missus (I'll call her the Cooker) and I left the Big City back in the early 80's to go live in the North woods, we got to experience a more primitive style of plumbing. We moved in June to a cabin/house that was a more or less seasonal dwelling. The pump for the lake water system sat down near the shore and at the first sign of winter (late September) it froze and cracked, never to be useful again. The job of running water was now mine. I got to run down to the lake about 120 feet away with two 5-gallon buckets (balance, ya know) and run back up to the house. This wasn't so bad until about early November when the water started to get a bit firmer. I had an ice chisel and an ice auger and thought I had it figured out. Well, along comes January and the ice is getting a few feet thick as the temperatures hover between -20F and -40F for a week or two at a time. I finally figured out that if I chiseled a basin in the ice to dip the buckets, covered it with Styrofoam and covered that with snow I wouldn't have to work so hard every day for our water. We could get by on about 10 gallons a day if we were frugal. That was enough for the dogs, cats, birds, and us, and a copper kettle on the wood stove with a nice supply of hot water. We could take a sponge bath regularly (standing in a large plastic garbage can) and went out to our neighbor's island for our weekly Saturday night sauna and potluck. We could, until this point, manually flush our indoor toilet. Until the line to the septic tank froze (average frost depth at that location is about five feet). Fortunately, we did have an outhouse, a two-holer no less, that we began to utilize immediately. Going out to the little former ice fishing shack at 30 below was something you had to psych up for. You didn't usually have much time to psych up, though. The miracle of Styrofoam is under rated in such circumstances. Get a nice piece of it to insulate you from where you sit and you are living in the lap of luxury!
When the lake finally thawed out in early May I got a new pump, but the line to the septic was still toast until the ground thawed and the pipe could be fixed, but that is another story.

The Cooker has a really nice grey gelding called Mirage. He came to us from Washington state and lived about five blocks from Bill Gates. I don't think they knew each other, though. He is a terrific trail horse and a real "chick magnet", but that doesn't do my wife any good and would only get me in trouble. Here is a picture of him turning on a dime and leaving change. He was living in British Columbia at the time of this photo. 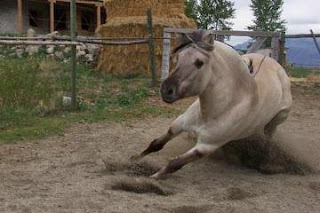