Nina asked about my Danish cousins in the last post and the Icelandic connection to them. Most of that part of my family connection only goes back to the children of my great grandparents in Iceland, but the connection between the two countries is a long one. In a vastly oversimplified nutshell, Iceland was subject to the Norwegian king until about 1380. Then came the Kalmar Union which  united most of what is now Scandinavia, but was sort of dominated by Denmark, and by the mid 1600's Iceland lost pretty much all of its autonomy to Denmark until about 1874 when they were granted home rule. I don't believe they were a fully independent country until around the end of WW2. Lucky for them that they never had much and could never be totally exploited by dominant government. I am being a bit facetious here.

This brings me to something near and dear to my heart,  Halldór Laxness. He writes of the common people of Iceland from a historical fiction point of view. His characters remind me of the "outsider" types from when I read Hermann Hesse's novels as a young man. Professor Batty and Rose give wonderful reviews of his works and I can only nod in agreement with the things they say. Back to the Danish thing. Laxness' book, Iceland's Bell, really gives an interesting view of the Danish dominance in that mid 1600's to mid 1800's time period. Iceland's climate is marginal for subsistence living and periods of cool down are fairly devastating to what little agriculture there is. Life is always difficult in Iceland, but sometimes it is even more so when you get a mini ice age or climate shift. Laxness won the Nobel Prize for his work in 1955. I have read most of his translated works, but some are hard to come by. My roomie felt sorry for me a week or two ago and used her influence at our local library to borrow Salka Valka from one of the Twin Cities libraries. It is a photocopied edition with a new binding and is a bit rare and/or expensive to buy. I'll finish it in the next few days. What a treat! 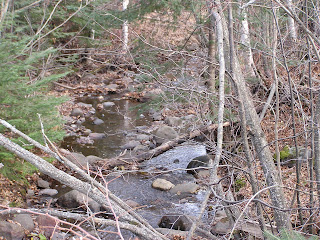 I must be feeling better to write this much. Went for a walk around the farm and can't believe it is the middle of November. Here is the little trout stream that goes through the farm. 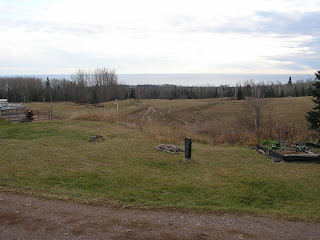 Even the view from the deck isn't bad today. I hope to turn my front yard obelisk into a Runestone someday.
Posted by Jono at 2:21 PM