Happy Thanksgiving to all of you in the U.S.!
The Critter cam took some interesting photos last night. Usually I leave it in place for a few days, but I wanted to see if the corn would make much difference. It did. There were 61 pictures on the sd card, so I snagged the card out of the camera, brought it in and stuck it in the slot in the side of the TV (I love it when technology is actually good for something) and watched the slide show. 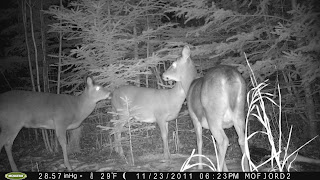 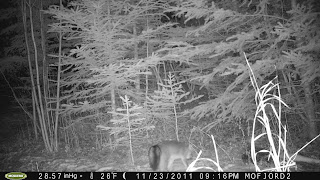 So the first picture is Bambi's aunt and her two kids and below that is  Redd Foxx. The foxes around here are kind of different. Up the street a few doors there is a place that used to farm foxes for their fur. I don't know much about it's demise, but I suspect the expense of raising foxes and killing them for their pelt is a money losing proposition. The owner of the farm had many varieties of coat color from black to white and everything in between. When he went out of business he released the foxes who then bred with the local wild population. I have seen everything from a light golden blonde color to jet black with a silver tip on the tail. I assume that the red coloration is still the dominant trait (that is at least 90% of what we normally see) and will eventually be the only color we see at some point, but it has been about 25 years since the farm and we still see some different colors. As long as they stay away from the Roomie's chickens we will all live in harmony.

Back in 2007 my brother and I stayed on a farm in Northern Iceland. June 1st is National Seaman's Day and we went out on a boat on  Eyjafjörður toward the island of Hrisey where it seemed many fishing boats and some jet skis (Brrrr!) were out on the water waving and cheering. 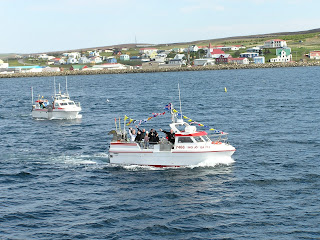 Stefan, the owner of the farm where we were staying, brought the three German women that worked on the farm, my brother, and myself to his friend's boat where we had a terrific time on the water about 20 miles south of the Arctic Circle. Here is my brother with the women. 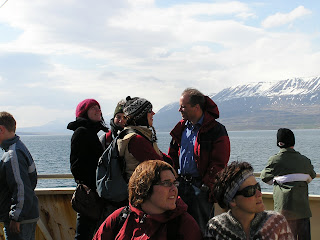 And here is my favorite picture from that day. 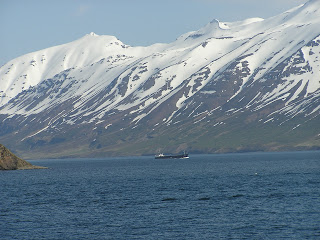 I better go now. The Cooker is making some delicious smelling food for dinner. I better see if I can stay out of the way.