What a bizarre week.

You have your "legitimate rapist" telling everyone about secret secretions that prevent pregnancy when your rapist is "legitimate" as opposed to "illegitimate". It would seem that politicians now think they are qualified gynecologists. You can tell by the smarmy arrogant smile they wear when they think they have said something brilliant. The good news is that there are a bunch of them meeting in a place this week that is in line with the edge of a hurricane. Maybe some of them will be washed out to sea. The bad news is that they won't be eaten by sharks. It is because they either taste like the shit that comes out of their mouths or just a professional courtesy.

Then there is Anders Breivik, the mass murdering right wing batshit crazy whacko, killer of children, and savior of the white master race was finally convicted of something and sent to prison. Maybe he will become a victim of his own twisted thoughts and just stop breathing. Maybe karma will be a great equalizer.

Neil Armstrong died yesterday. I think his accomplishments as an astronaut will be an example of what humans can achieve if they take a moment to stop the killing and the general neglect of their fellow humans. Of course there will always be those who don't believe the moon landing ever happened. "the dream never dies, just the dreamer."

The Cooker and I had to go to Duluth for a medical appointment on Thursday, the first of many for the next couple of months. On the way back I got to see a very rare sight which I was not able to capture on my camera because I didn't have it along. It was the end of the rainbow! It was right by the Cascade River about 50 yards off shore. The colors were moving around on the shimmering water in a most amazing display. Yes, I was tempted to jump in the frigid water and dive to see what was below the surface. It would have cost me my life, but maybe I would finally know what lay at the end. I decided not to risk it for now as I am still needed at home and at work. Just for a moment, though, I seriously wondered while continuing on down the road. Besides I really need to see England , Norway, and Iceland and all my relatives in those wonderful places. I miss them all.

But then, when you least expect it, you open the garage door to find Norma Jean standing on the roof of the car. 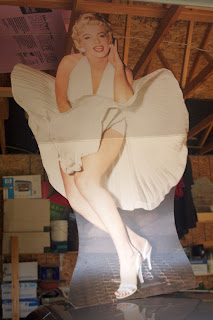 Or you get lucky while garage saling on a Saturday morning and find a treasure chest full of new old toys to play with. Even this picture was taken with a vintage lens from the treasure chest. 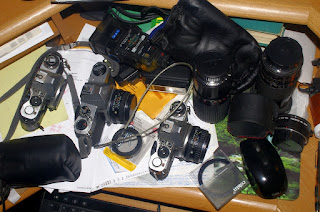 Then you go for a walk in the woods and find something that may be the result of the Icelandic "Hidden People" who have followed you across the sea. They reminded me that there are things I will never really know about. 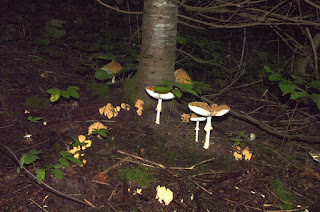 As you go back to the house you go by the apple tree and see that they are just about ready. 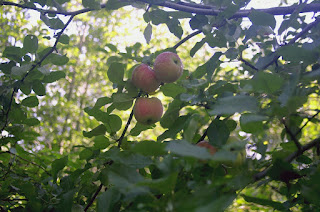 When you get to the back yard you feel safe and secure because Bella has got your back. 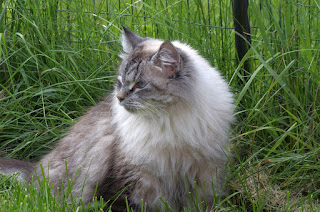 My own little world is a haven from the rest of wondrous, but whacky world we all have to share. Most days I'm glad to be here.

> Additional items of note:
- the MSL-Mars distance at UTC (or GMT) Saturday/Sunday day transition was 241,000 miles, similar to the Earth-moon distance. Mars, as seen from the spacecraft at this time, has twice the apparent diameter of the moon as seen from the Earth.
- Project approved early installation of second chance software (Johnny Grinblat activity lead), moving installation to doy 218T01:00 UTC (this evening, 6 pm local) rather than the nominally planned 08:00 UTC. The purpose is to do this important activity while the crew is fresher than they would be in the middle of the night.
- Mars weather (now clear skies) and space weather (only a low-energy coronal mass ejection from the Sun) are OK."

Hopefully, Curiosity will not crash after the ten years and thousands of people's work went into it. Maybe we'll see some pictures tomorrow.
It has been busy with summer activity on the farm. Stitch was participating in the Dragon Boat Races again this year. That's her steering the craft of the "Women on the Edge" team. 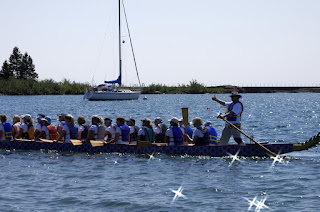 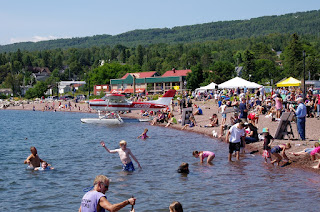 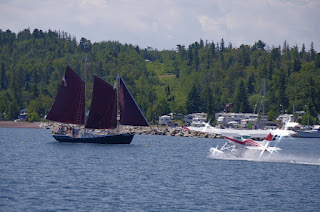 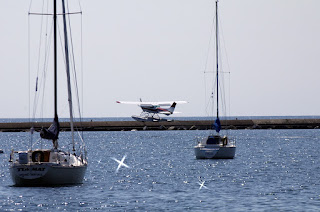