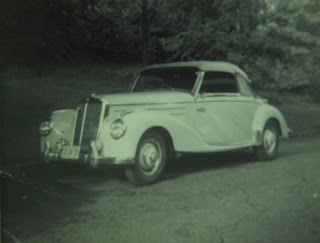 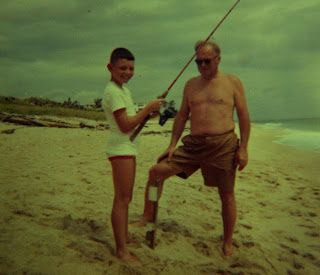 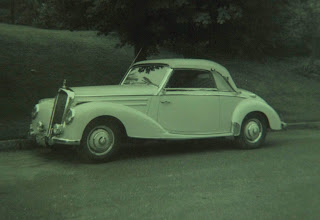 The long light lingers in the early morning and in the evening, too. Sometimes it is colorful and sometimes not, but it is always interesting to me. It often lasts only a few minutes and it is difficult to capture unless you are ready for it. Sometimes it is red. The bumps on the horizon are the Porcupine Mountains of Michigan's Upper Peninsula. They are about 70 miles away. Fortunately, we are high enough and they are high enough to get over the curvature issue of living on a sphere. I'm not sure how the flat-earthers interpret that. Click to embiggen. 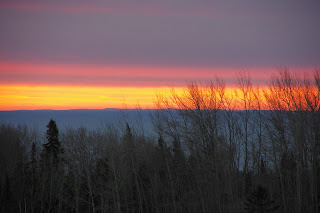 When the morning temperatures are around zero (-17C) the mist rises from the warmer-than-air water. When the air gets much colder and the water hasn't frozen the steam can look like small tornadoes rising from the sea. So far we haven't had any extremely cold temperatures. This was from a day or two after the first picture. 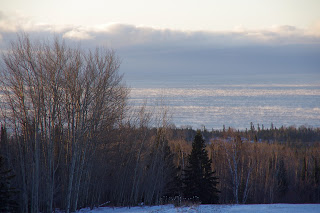 Evening light can also be dramatic, but usually it is something like this: 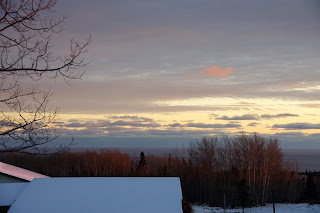 Pottery is over for the season (my season, anyway) and I thought I did more pieces. Then I remember tossing quite a few in the clay recycling bin so I guess it's all okay. It is always fun and I learned a few new techniques and refinements and how to salvage mistakes. I'll do some more next year. 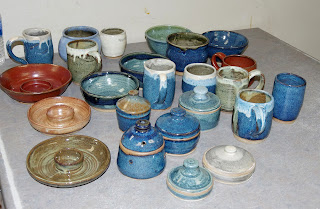 I didn't realize I had used so much blue glaze. It is a shade of red when applied.
My fellow "student", Ann, had some commissioned work, the saucers, for an upcoming wedding somewhere around the Twin Cities. Underneath they have the names of all the people who will receive them. Ann has done things professionally and can turn out amazing quality at volumes I can't imagine. I ask her how she does it. She said after a thousand or so it gets pretty automatic. Like riding a bicycle. I still have my training wheels on. I learned a few things from her and some of the other potters that just rent space in the studio. Here is some of Ann's work. Damn, she's good!

I don't want to gloat because it is generally bad karma, yet I was and still am delighted that the people of Alabama did not choose a smarmy, constitution-denying, sexual predator/pedophile to send to the U.S. Senate. 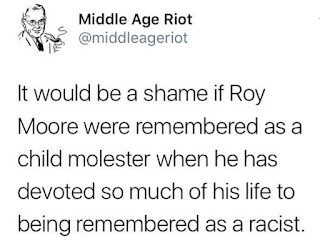 While I try to stay away from politics and religion here for purposes of civility, I do have strong convictions. At my workplace I have to deal with people from all parts of the political and religious spectrum and getting a regular paycheck is still critical. So I keep my mouth shut. Mostly.

Lest I be accused of being a wide-eyed optimist I really do think we are making a some progress. It is always slower than we would like and it often stalls or is put on the back burner, but I think we are finally taking a few steps forward. Let's keep the momentum going and maybe we can regain some lost ground.

To quote one of the great modern philosophers, Red Green, I leave you with this:
"Remember, I'm pulling for you. We're all in this together."
Posted by Jono at 1:30 PM 18 comments:

The Cooker signed up for Netflix and since we got broadband hooked up it seems time to move into the 21st century, albeit kicking and screaming. I just went along for the ride until I was alone and took a look for the things that might interest me. While I read mostly for entertainment I latched on to a genre a number of years ago that came from my first trip to Iceland. After reading most of the translated works of Halldór Kiljan Laxness, with guidance from Professor Batty and a few others, I needed more Iceland in my life. I started reading Arnaldur Indriðason's Detective Erlendur series and Yrsa Sigurðardóttir's crime novels. I was hooked. I had appreciated an occasional mystery, but now I was onto something more exotic and continued my quest into Nordic Noir which has included the Scandinavian countries, the Baltic Sea area and islands of the North Atlantic.

In real life Iceland's murder rate is practically zero, but these books have killed off a few more than that. Maybe it's the settings or the darkness that comes this time of year that adds to the mystery, I just don't know. It seems that most of the mysteries are in the harshest times, the worst winter storms, or the darkness that pervades in the winter. I digress.

I decided to watch a show that I found called Trapped. It looked interesting and was only about an hour long. I had heard of Baltasar Kormakur, the director, and recognized some of the actors from watching some things on Icelandic Cinema Online. What I didn't realize until the end of the first episode was that there were nine more 50 minute episodes to follow. Too late! I was hooked!

Set in a coastal town in East Iceland in February, The story takes place over about 5 days. A fishing boat coming into the harbor nets a plastic bag with a male torso in it, just after the ferry from Denmark passes by. This is a larger town so it has three police officers who all seem quite competent. However, they will need forensic help from Reykjavik and the police in Reykjavik want to run the investigation. Of course there is a huge blizzard that isolates the town for a few days. This isolation by weather is not unusual for towns in Iceland. This had everything in it, from human trafficking, to revenge, hate, love, mafia, arson, and more murder. It was a nightmare for this sleepy little village and it plays out beautifully. There are subtitles when the characters speak Icelandic or Danish, but there is some English spoken, as well.

The protagonist, Andri, is living with his ex in-laws and his daughters and awaits the arrival of his ex who is coming to visit with her new boyfriend. Andri hasn't let go of her yet, but he must, although his work is very intense and demanding at this time. The majestic mountains that surround the port have their own part to play in this series that had it's debut in Toronto two years ago. It looks like there will be a second season in 2018. Woohoo! I can't wait!

Here's the trailer (I hope).
If you like this kind of thing or if you're willing to give it a try, please do. You won't be disappointed. I watched it all in less than 48 hours. Guess I binged.

And now for something completely different.

If you need a little energy and can get it from a toe tapper. Here is a jig called Tripper's or Tripper's Jig. It is short and intense. Piano on the first part before the fiddle and the rest of the band kick in. It is difficult to sit still for this.