We have gone from autumn to winter this week. Back on the anniversary of the sinking of the Edmund Fitzgerald we had a bit of wind and dampness. The big lake was showing a bit of its dark side. 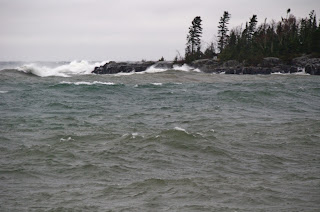 While looking for more dramatic pictures that I was never very happy with, I came across some young Canadian surfers trying to catch a wave in the not very well formed surf. I told them that I had done a bit of surfing forty-some years earlier on the U.S. east coast. They said that they thought salt water stung their eyes too much and I said there weren't any sharks in this lake either. Of course, I only had to wear a bathing suit or shorts instead of a wet suit with long underwear beneath it. 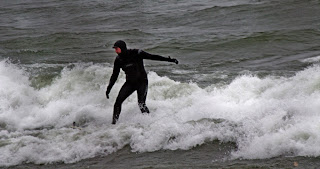 The freighters are coming in closer in order to avoid the wind and waves of the winter season. The shipping season ends around the middle of January when the Soo Locks (Sault Ste. Marie) freeze up. The Icebreakers come in mid-March to try and open the shipping lanes, harbors, and locks to get the season underway again. Here was one headed to Duluth last week. At night they look like floating casinos. 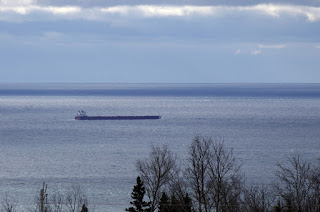 Distances are hard to judge, but this one is a couple of miles out. They look like ghost ships in January with the steam rising from the lake partially obscuring their form. I'll try to remember to post that effect when the time comes. Since it is dumb luck when I can remember my name, please don't hold your breath in anticipation of that event.

I need to show you what the critter cam looks like. In this picture it is mounted on a yellow birch tree. Fortunately I moved it because the beaver(s) took down the two closest trunks and the third is only a few bites from falling. 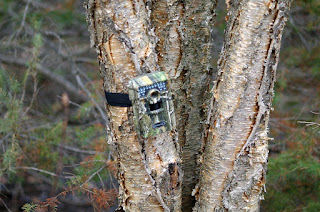 Even though we had a few inches of snow the other day there are very few tracks around the ponds other than deer, snowshoe hare, and pine marten (sable). No further beaver activity was noticed. I wonder where the soggy little bastard went?

Just before the snow, as the clouds were rolling in, the moon had risen in the east ( as it often does!). I was sitting in front of the barn and took its portrait. A "moon shot", or "shooting the moon", or maybe I was just being mooned by a heavenly body (in my dreams) is how I refer to it, but nevertheless here is what it looked like. Fullness comes in a few days. 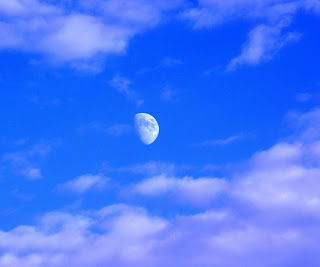 So, as the shortening, cold, and gloomy days of early winter start to put me into a coma, I take solace in the fact that in four short weeks the days will start to get longer. The cats will start to shed in earnest as will the horses and I will be covered in discarded fur and hair (mine was discarded decades ago). Sneezing and spitting as the hairy byproducts try to invade my inner person is a sure sign of spring along with the natural harbingers that surround this rural area. But I'm getting ahead of myself as we only just passed the Thanksgiving holiday. Thank goodness my mind has the ability to time travel, although I shouldn't let it wander far as it is too small to be out by itself.

Just as I expected, my furry neighbors couldn't keep still for long. But I have a new theory that may challenge some old ideas. The theory is that the racoons and the beavers are in cahoots. There they are hanging out in the same place, although not at the same time. They may be working in shifts, but I need to do more research to be sure. Too bad money for academic studies is in such short supply, otherwise I could get a grant, write a thesis, and be known worldwide in wildlife circles for my breakthrough ideas (can you say delusions of grandeur?). Here, my friends is the photographic evidence! 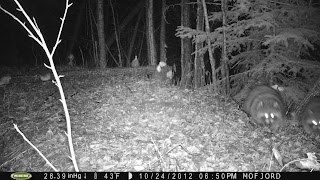 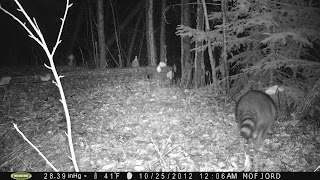 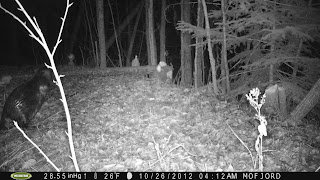 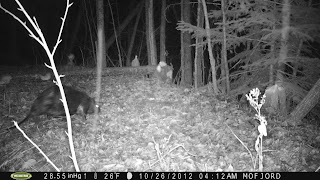 You can see by the time and date stamp that they work different shifts, so that idea is confirmed.

Now that the ponds are skimming over with ice it will be interesting to see what happens next. I haven't seen any activity this week except for where the camera isn't. I am thinking that deer hunting season is some sort of holiday for the rest of the critters while the deer try to avoid an untimely death. The animals seem to have different labor laws with more time off for quality time with their families and most of the work is seasonal. It seems to work for them.