Shipping season is underway now. In the last few weeks the ice coverage on Lake Superior went from about 95% to less than 25%. The ice is up against the eastern shores and in the bays and the icebreakers are working to free all the harbors and keep the Soo Locks open. I have been seeing the lights out on the lake at night and the freighters, carrying mostly iron ore and grain, are lit up like floating casinos.  Yesterday was windy (about 30 knots on the water) and the ships were hugging the shore for protection.

I believe this is the Paul R. Tregurtha on its way to the Soo Locks yesterday morning. 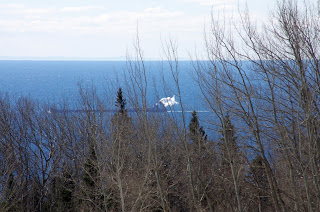 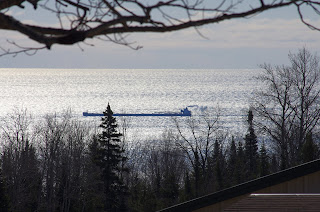 I just finished reading an Icelandic mystery, The Darkness: A Thriller, by Ragnar Jonasson. It is the first in his Hulda series. I have previously read the first series of five books from this author a year or two ago and decided to try this new series. The main character, Hulda, is in her last days of work before retirement as an investigator. It took me two days to read this which is less time than it usually takes, but the stars were aligned and I didn’t have a lot of pressing chores, some of which I will do today. Procrastination for the sake of a good book is a pardonable sin in my world. The next book in the series is set 25 years previously, so I may have to read that soon to get a feel for Hulda from her younger days. There is very little actual murder in Iceland, maybe one every couple of years, and the killer was usually drunk and confesses immediately, so you can see that reality and fiction are well separated.

Most of what I have read in the last ten years or so is of the genre, Nordic Noir, which for some reason appeals to me. I think the Scandinavian landscapes appeal to me, especially the bleakness of the Icelandic landscape in winter. It takes some imagination as I have only seen it in early summer which also has a stark beauty to it. Here are a few pictures of Iceland from a previous visit. As always, click to embiggen. 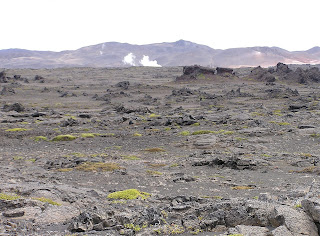 This is from a lava field where my brother and I were hiking and yes, that is geothermal steam rising  in the distance. 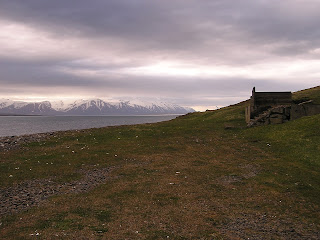 This is an abandoned farmhouse near the fjord. These abandoned homes often appear in the Icelandic mysteries. 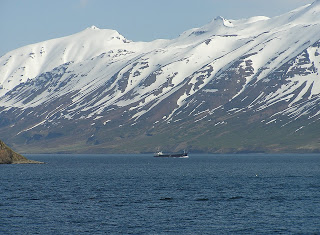 A vessel returning from the sea. 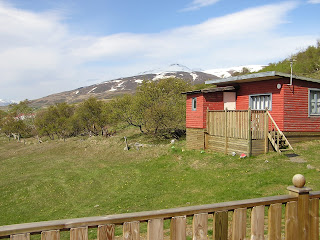 A cabin where we stayed. Note the trees. The standard joke about the trees in Iceland is this. "What do you do if you get lost in an Icelandic Forest? Stand up!"

Living in a National Forest makes for quite a contrast, but one I find thoroughly enjoyable.

Tomorrow is April Fool's Day so be careful out there! 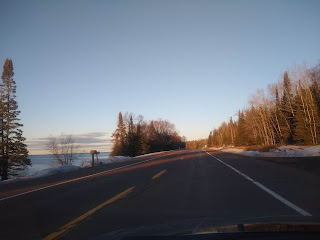 This was the morning commute through rush hour traffic the other day. Traffic will be this heavy for another month and a half, before the summer home people and tourists arrive. As you can see the snow is melting and the roads are bare pavement again making driving less of a challenge. The local deer (white tail) population is hanging around the roads and is being picked off by motorists along the North Shore on a daily basis. While they don't go to waste it is still sad to see their carcasses by the side of the road.

It has been above freezing nearly every day and below freezing at night which are the conditions favorable to tapping maple trees for sap. Syrup season is in full swing and I can't wait to taste the results! I dream of salmon on the grill after soaking in a marinade of maple syrup and lemon juice. Yummy!

Not much exciting to report, but it is interesting to watch as people slowly come out of their winter "hibernation" dressed in lighter clothing with their shoulders relaxed instead of hunched up around their necks.

Things are melting on the farm and the horses are shedding buckets of fur which is picked up by the birds to use for nesting material. It is organic and recyclable, so highly desirable building material.This is what it looks like this morning. Still a lot of snow in the woods and around the edges of everything. 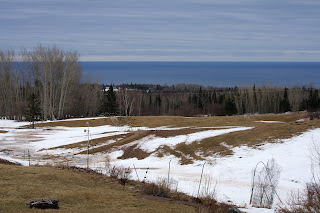 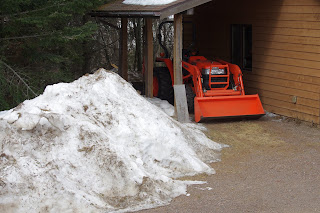 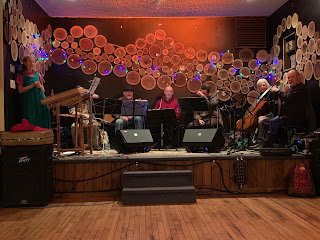 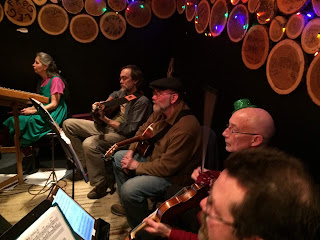 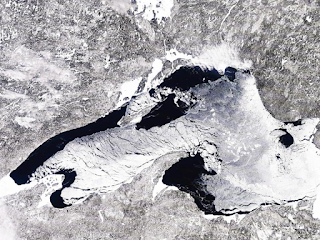 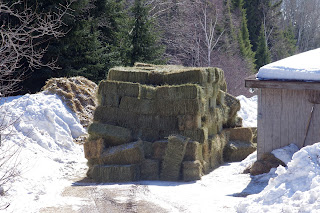 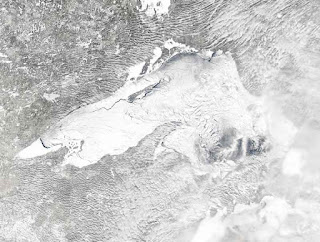 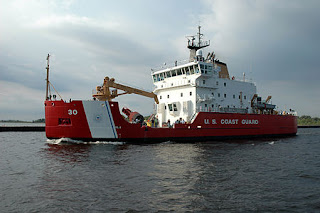 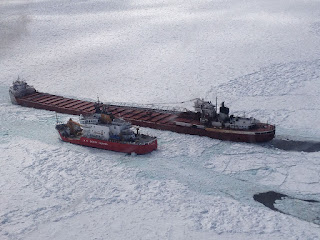 Lake Superior ice is always changing and is always fun to watch. Sometimes it’s dramatic and sometimes it is just frozen water. As of Thursday the official NOAA announcement was that the lake was 86% ice covered. Just so you know, here are a few interesting facts about the lake.

The surface area is 31,700 square miles or 81,270 square kilometers and contains 2900 cubic miles or 12,100 cubic kilometers of fresh water, 10% of the earth’s fresh surface water. The average annual temperature of the lake is 40F (4.4C). I could bore you with more facts, but you can just look them up if you are interested. 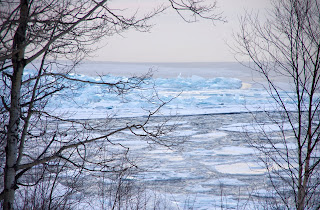 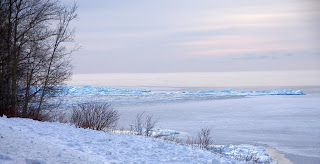 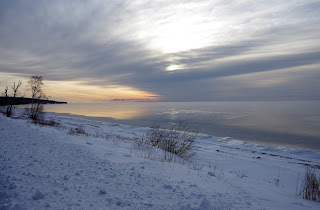 This winter it is getting close to freezing entirely, but I don’t think it will. While the next few nights will be sub zero Fahrenheit there will also be a strong wind that will move the ice sheets around and break them into pieces. If you like ice in your drinks, this is a good time to go get a few shards for doing so. Be sure to get one you can actually lift and be careful you don’t get hurt or fall into the water. You won’t last long if you do. 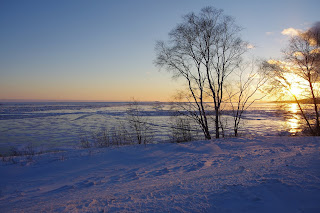 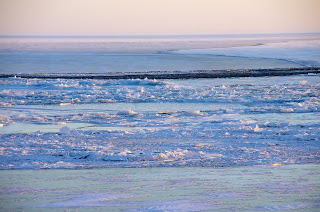 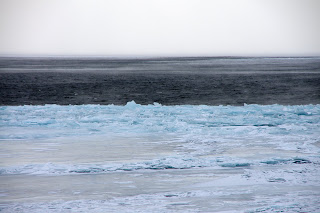 It is fun and interesting to watch the changes, especially this time of year. This is about the time of maximum ice as it takes all winter for the surface to cool down enough to freeze, but with the days lengthening and the temperatures about to start warming up it is a fleeting moment in the overall scheme of things. That makes it fun for a geek like me to watch the constant changes.

The first one is Five Mile Rock which is, oddly enough, about 5 miles from town. 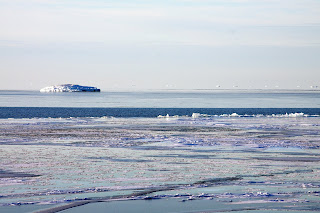 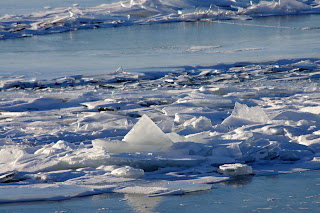 I live about ten miles from town, where I work, and about 7 or 8 miles of that is along the lakeshore. All the pictures in this entry are taken between home and work. I am also pleased to note that I don’t usually need my headlights on to go either to or from work now, although daylight saving time (DST) may screw that up a bit next weekend when we move our clocks ahead by an hour. Don’t get me started on that idiocy.

Here's one from the deck this morning. More open water due to the wind. 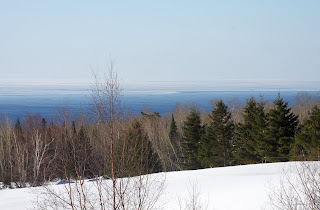 For a better look at the photos just click on them to embiggen.
Posted by Jono at 7:46 AM 28 comments: