I just finished reading Salka Valka yesterday, one of Laxness' earlier novels. It is a story of so many things like poverty, politics, religion, passion, and strength of spirit. Written as two books in the early 1930's it begins with Salka, a tough, independent 11 year old girl, and her mother arriving by ship at an insignificant fishing village somewhere south from where they came. Salka finds work in the local fish processing business and her mother finds Jesus at the Salvation Army. They are dependent on each other for so much, yet very independent in their behavior in day to day living. The dire poverty that encompasses everyone's life in the village is taken as matter of fact with little prospect of improvement. Later in her life Salka does a little better from sheer determination and a bit of financial help and becomes involved in the politics of the day. This is a time when Marxisn (Karl, not Groucho) is giving some hope to the downtrodden of the world and is even making inroads in Iceland. Anything looks good to people who have nothing, but the Icelanders are a practical lot and they do what they need to in order to survive. Salka is looked up to for her determination and strength and is finally able to come to terms with her lifelong attachment to a more worldly man she has known since her arrival in the village. Their love is intense, but his weaknesses will ultimately doom the relationship. The ending is very touching and totally right for her.
This is a book I will have to read again someday to appreciate the nuances of the characters even more. The translation is old and could probably be done somewhat better as the relationships between the characters range from the simple to the very complex showing so much of what it is to be human in a harsh world. I also need to read a good biography of Laxness to better understand how the different phases of his life affected the stories he wrote. I need to thank my roomie for getting the local library to find this book and borrow it from a Big City library. It has been photocopied and rebound and I feel fortunate to have been able to read it as it is rare in the English version.

On a lighter note, I have repositioned our critter cam near our lower pond. Firearms deer season is over now and I got a nice nighttime picture of Bambi and her mother. I am also cheating by putting out a little snack of corn to see what comes by. Just does so far, but the bucks should be a bit less spooky now that no one is shooting at them. Here is a photo from last night. 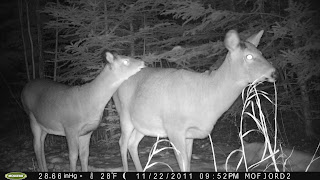