The missus bought a trail camera a couple of weeks ago. Mostly we get various deer and the occasional fox. Nearly everywhere we have put it around the farm we get more or less the same results. No moose, coyote, bear, or wolf, but the occasional red squirrel will pose for a shot. The soon to be falling snow will give me a better idea of the more heavily used game trails and general critter hangouts. I definitely need to do some picture taking. Many of the good ones are in my wife's computer. How did that happen?

Just for fun I will post this picture of a beautiful witch in Norway. I know she was trying to lure me to me demise in the thundering waterfall beside her. If my brother hadn't held me back I don't know what would have happened! 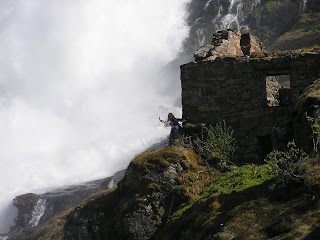 I can almost hear her haunting call over the cascading water. Pretty scary stuff for a naive tourist!
Posted by Jono at 5:17 PM