We are embarking on the world's slowest kitchen remodel this week. A friend and I built this house back in 1994 and the Cooker and I moved in before we had any finished walls. The kitchen and living/dining area had ceilings, but that was it. The old (1915) farmhouse had kicked us out when the septic system started backing up and the carbon monoxide detector finally went off due to the cracked heat exchanger in the furnace. The well had been contaminated for years.It was the week before Thanksgiving and the cooker made dinner on the two burner camp stove in what would be the utility room as that was where the water was. The refrigerator was in the living room. Within a few weeks we had a functioning kitchen and bathroom as the propane was running out in the old house and it would soon freeze up. We had been running back and forth moving things and taking showers there.

Our new kitchen was about 8'x18' and pretty nice, but not fancy. So 18 years later we are starting a slow remodel. The reason is twofold. One, we don't adapt to quick changes as well as we used to and two, we are not as wealthy as we deserve to be. So we started out with the vent hood. Our original was your basic $100 variety with a light bulb and a fan that made noise like it was sucking bad air out of the house, but in reality didn't do that very well. A kitten at its mother's teat has more suction than that fan. So, after much online research I sent the Cooker and Stitch to the really Big City of Duluth to get one. Even down there they had to order it and were able to bring it back home a week and a half ago. Time to figure out how to get the old one out and the new one in.

I remembered putting in the original by myself. That included cutting the hole in the wall and installing the outside vent. Since it was long ago, the only details I remembered were swearing a lot, sweating a lot and bleeding a little. Being older and presumably wiser, I decided to get some help this time. I called my friend, Mr. Amazing, who I worked with regularly a few years ago doing mostly carpenter type work. Mr Amazing is a little more than half my age, a couple of inches taller, way stronger, and according to the Cooker and Stitch, quite a piece of eye candy. I'll mention that to his wife.

The old  hood came out pretty easily, but it was unbelievably greasy in the places you can't get to. In an awesome display of teamwork, with fitting it in place and me holding it while Mr. Amazing did the screwing (which is only right as he is younger and more virile) of the hood into place, the worst was over. The wiring was simple, but awkward. I still bled a little from that, but it was Mr. Amazing who was able to get the grounding wire attached. I turned the breaker back on and, lo and behold, the thing actually worked! 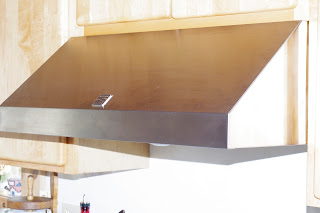 Now that it is in we have tried it twice. The halogen lights a great and the blower is four times as powerful and four times quieter than its predecessor.  I'll pick up a stainless back splash soon and when we get this paid for and start putting away a few sheckles, the next thing will be the stove.

One of the reasons for a better vent hood is this: 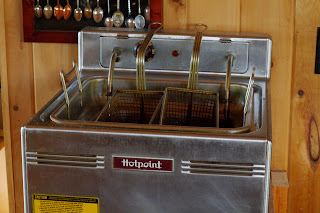 .
This is Kong, the 800 pound gorilla (deep fat fryer) in the room. We don't eat a lot of fried food, but when we do it we do it right. A good vent is a must for one of these, otherwise you go to work the next day smelling like a french fry. Strange dogs want to be your best friend. It is especially nice when the women come home after a successful fishing expedition and fishing opener is only 2 months away. Yummy!
Posted by Jono at 9:31 AM