As the days get longer and this excuse for a winter seems to fade little by little. My thoughts turn to the "land of the ice and snow, from the midnight sun where the hot springs flow." Iceland. Especially the northern part where it looks like this today. 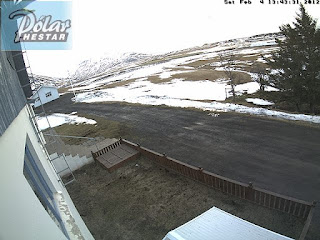 Their snow has been melting for the last few days, but it can still easily occur for the next few months. This is (was) a live shot from   Pólar Hestar .
It is the old farm Grytubakki about 25 miles north of Akureyri near the village of Grenivik. 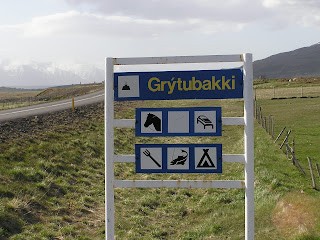 It is across the Eyjafjördur from where my grandfather was born. My brother and I stayed here back in 2007 when we took our father's ashes back to the land of his father.I had been busy with work and school and didn't have much time to research where we were going. My thoughtful, and occasionally brilliant, younger brother made the arrangements. Here is what we saw when we arrived after a nice drive along the fjord. 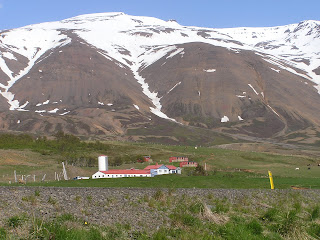 Our hosts,  Stefan and Juliane, were very kind and knowledgeable. They took care of us when we needed it and left us alone when we  needed to be.

The food was excellent and served in their dining room where I felt comfortable and very much at home. I have cats, dogs, horses, and chickens here on my farm and they had that and sheep, as well. I don't recall any chickens, though. I got to go riding on their Icelandic horses ( and learned the tolt, a unique gait) with one of the three absolutely lovely German girls working there, Miriam. Here we are out on the trail. 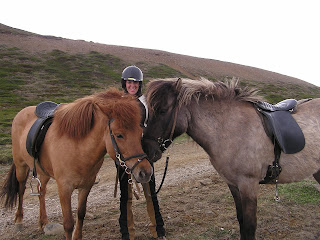 Later, Stefan called around to his neighbors and then took my brother and I to an old abandoned farm on the fjord where we could put Otto's ashes in the sea. He left us for a while so we could complete our mission (which was actually the main reason we went to Iceland). This is where we were on the shore of the longest fjord in Iceland where the Eider ducks were swimming about 30 miles south of the Arctic Circle. It is a magical place to me, and I even thought I saw some of the "hidden people" (elves) in the rocks and behind the ruins. 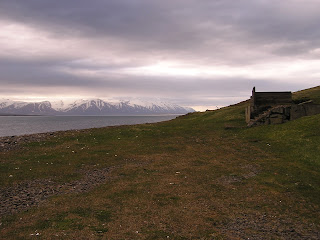 The three or four days we spent here caused me to fall in love with this volcanic rock in the middle of the North Atlantic. The more I learned about the culture, the arts, the people, caused me to start reading for pleasure again and consider getting more serious about photography again. It seemed to draw out my sleeping interests and bring them back to life. The blogs I started reading gave me more insights. I started daily reading the Iceland Review, edited by my distant, but infinitely smart and lovely cousin Eygló.
Our common ancestry diverges in the mid 1700's, but we seem to have a lot in common which gets me to wonder about the strength of genetics (the entire Icelandic genealogy is available to all Icelanders online from Decode Genetics).

I have to give my wife, the Cooker, a big "thank you" for understanding my affair (obsession?) with this amazing island nation. I wish I would have started it so much earlier in life, but it gives me such great pleasure now. I will leave it for now with this peaceful picture from behind our cabin at  Grytubakki. 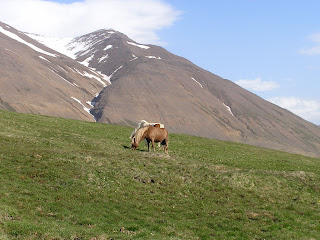 Speaking of pictures, today is World Pentax Day, where all the Pentaxians in the world take pictures and send them in to contribute to an album of the best stuff. The really cool thing is that there are about 40,000 of us on this forum. That will give a photo survey of today on planet earth by people from all over the place. What a concept! Hopefully, I will have something decent to offer by the end of the day from my little corner of the planet.
Posted by Jono at 7:33 AM