Explorers and pictures and birds, oh, my!

Another week passes like nothing here near the shores of Gitchigumee. It's been a quiet week, just the way we like them. Our local Arctic explorer was hanging out at one of the local outfitters. He recently got back from a second attempt at climbing Denali (My. McKinley) in January, something that has never been done successfully. He has made it to over 17,000 feet both times, but ends up living (if you can call it that) in a snow cave for a week while the outside temperature hovers around 60 below and winds up to one hundred miles per hour howl outside. He has come down after that (good idea!) I learned from his mother many years ago that his great x6 grandfather was a famous French explorer. I told him that he probably can't help himself as it is likely a genetic aberration. He laughed and agreed.

The women went out riding last Sunday and Stitch rode Pookie, who came back to us last year after a seven year stint as a carriage horse at the Kentucky Horse Park. Here they are at the end of the trail. 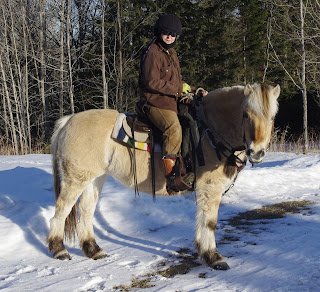 Pookie is short, but very powerful and was born about 100 feet from where I took this picture.

Speaking of pictures, I had to go to Duluth (gateway to Central Minnesota) on Thursday for a doctor appointment (three months post-surgery, yay!) and happened to look at craigslist the day before. There was an ad for an old Pentax slr with three lenses and some filters. I contacted the seller and arranged to meet him at his workplace (a high end non-leather motorcycle apparel manufacturer) where we met and I left with the goodies. The seller was from Manchester, UK, which I thought was very cool. Anyway, just about all Pentax lenses ever made fit on their modern digital slr cameras. I got excited to be home during daylight yesterday and took a few shots with the 80-200 zoom lens. I need to practice a lot more, but it is fun to see what can happen. Here are some Pine Grosbeaks and a Pine Siskin. 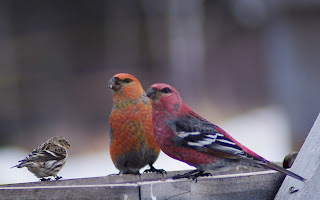 It's fun to get inexpensive new/old toys to play with!

I have strong political opinions, but rarely mention them here as so many people do it so much better, but I have to pass along this groaner. A liberal, a conservative, and a moderate walk into a bar. The bartender says, " What'll it be Mitt?"

Don't forget your special friends on Tuesday. Valentine's Day is a way to show them you give a shit care about them. I see young guys getting gifts, flowers, and fancy dinners all with the hope of getting laid winning the favors of their sweethearts. We older guys just need to remember to say thanks, because sometimes, it's all we can do just to remember anything. I have a hard time figuring out what to do for the Cooker (Stitch is easy as she is a chocaholic).  What can I do for someone who was a florist, cooks better than any restaurant within a hundred and fifty miles, makes her own cards and doesn't like the "cheap" chocolate available locally? Especially when I only remember these things at the last possible moment.  Maybe I'll write a poem. Let's see. Roses are red.....
Posted by Jono at 3:49 PM