It has been at least 45 days since we have had an above freezing temperature. Not even one ‘teaser’ day!  At least we haven’t had much additional snow since last week, but some nasty winds blowing at over 50 mph. That can get annoying, but I think of the early white settlers in North Dakota and remember reading reports of them occasionally going insane in the relentless winds. Then I feel much less self pity.

Now I just watch as the ice sheets move back and forth toward and away from the shoreline. That is where I appreciate the wind when it blows the sheets toward the U.P. of Michigan. I hope they appreciate our little gift. This morning there is some open water again, but it comes and goes and changes hourly. Watching it is a relaxing affair, just a tad more interesting than watching paint dry and more contemplative, too. 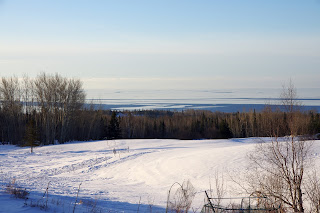 This frozen phenomenon occurs more now as the lake has warmed up noticeably in the last century. To illustrate this I give you a blurb from our local fish wrapper from 90 years ago, February 21, 1929.
“Fritz Oberg drove from Grand Portage to Reservation Bay by way of the lake ice in 15 minutes. It takes about an hour via the road.” While I am not sure of the exact bay that refers to (no longer on the maps) I would imagine that distance would not be more than 15 miles as top speed on a Model A Ford at that time was 65mph and I believe that is wishful thinking for the most part. A better assumption would be about 10 miles which also tells of road “conditions” such as they were back then. Roads and driving were a relatively new thing in this part of the country. I know the girls living on this farm at that time walked the ten miles to town and back every Saturday to do their shopping. And I thought I was being somewhat active taking a two mile walk yesterday along with the regular farm chores. Times have changed! 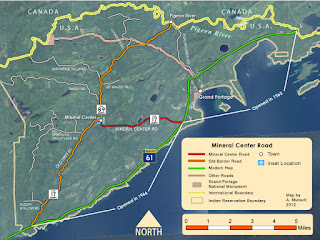 You can see that the modern road was opened in 1966.

Pardon my digression. Meanwhile, the snow isn’t melting any time soon. Here is a shot of the garage and my well loved tractor to give you an idea. I think I'll go skiing later. 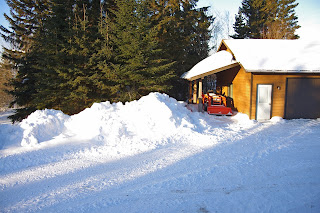 Long ago I worked on a golf course with an interesting, but illiterate old guy we affectionately called Hillbilly because, well, that’s what he was. He always had a bright outlook and often said, “Better days are comin’!”
Posted by Jono at 7:08 AM