I watched much of the Jet Propulsion Laboratory's control center's last couple of hours following the Cassini spacecraft's final moments before burning up in Saturn's atmosphere.  I've been fascinated by space stuff since Alan Shepherd's first Mercury flight.

When it finally plunged into Saturn's atmosphere it was going well over 70,000 miles per hour (112,654 kph). Radio contact was lost and Cassini was no more. It was launched in 1997 and took seven years to get to Saturn. It orbited Saturn, checked out the rings and the moons (Titan, Europa, and 50 plus others) and gathered data for thirteen years about the makeup of all these places that only existed in little more than our imaginations previously. Amazing things like water on Titan, ice jets spewing from Enceladus and unbelievable things about the rings. There are volumes of things I could tell you about, but I only have what's left of my lifetime. Follow the link above and be amazed. At the end of its twenty year mission everyone in the control room looked a bit misty-eyed. After so long and all the dedication and time put into it I can't blame them. The scope of what they have been a part of is nearly unbelievable and will continue to educate and fascinate for many years to come.

You may wonder what connection I have to such a thing. I wouldn't have believed it either, but I owe it to my father. Remember when he was a foreign student at N.C. State back after WW2? Some faculty would bring the foreign students to their homes for dinner and discussions and broadening horizons. What I didn't know until after my father, Otto, died was that he had kept up a correspondence with the young daughter of one of the faculty members he met at one of these dinners. Otto regularly corresponded with hundreds of friends and relatives throughout his life and in going through mail that kept coming from these people (I did respond to all of them in one way or another)  I found several from Jim and Barbara in Pasadena. It was hand written from Barbara about Jim's exploits at the JPL there and had all this cool stuff about the satellites and probes that NASA sent out into the universe. It turns out that Jim was the Deep Space Radio guy transmitting and receiving from all these probes. He's the guy setting up communications with Mariner, Viking, Galileo, Deep Space 1, Dawn and numerous others. Holy shit!

About five years ago Jim and Barbara were on their way from Pasadena to visit their kids near the Adirondack Mountains of New York. They stopped my my humble abode for a quick visit and I was thrilled, honored, and overjoyed at getting to meet them. I lost contact for a while and am now trying to re-establish it. Wish me luck!

The sandhill cranes stopped by for a visit. Probably thinking about heading south for the winter. At least the have the sense that god gave geese to figure out that this is a good idea. They probably spent a winter here once and that was enough. They were way down in the pasture, but since they are about four feet tall I spotted them when going out to feed the horses this morning. 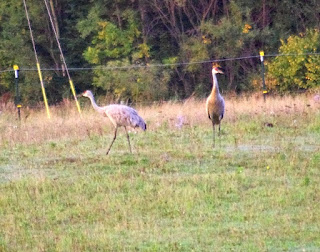 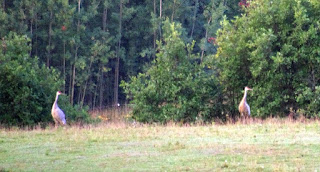 Fall colors have started in earnest now. With the wet conditions all summer and a gently cooling fall predicted it should be a good show this year. Predictions being what they are and Nature being what she is I'll just keep my fingers crossed and my eyes open for some good photo ops. 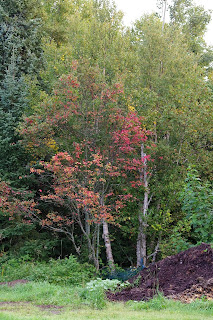 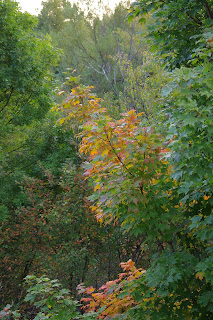