When we put the horses in last night it was -12F (-24C) and the wind was picking up pushing the windchill to painful limits. When I woke up this morning (no, this is not the opening lyric of a blues song) the wind had done its job and driven the predawn temperature to -25F (-32C). It's friggin' March for god's sake! At least the wind had died down and the dog lasted for about two minutes before attempting to walk on some combination of three legs. Put the dog back in and went with Stitch to let the horses out of the barn. It was 0F (-17C) in the barn and their noses were a bit frosty, but the sun was coming up and would give them some comfort.

BUT, there was a definite harbinger of spring yesterday! I know, if there are no pics it didn't happen. Well, guess what? I grabbed a couple of quick shots just to prove it. The ravens are starting to build their nests and already looking for and finding insulation. Our mare, Vedas starts to shed about the first of the year and is now blowing her coat. The ravens know this after years of observation and decided to take advantage of the situation while keeping their feet warm at the same time. 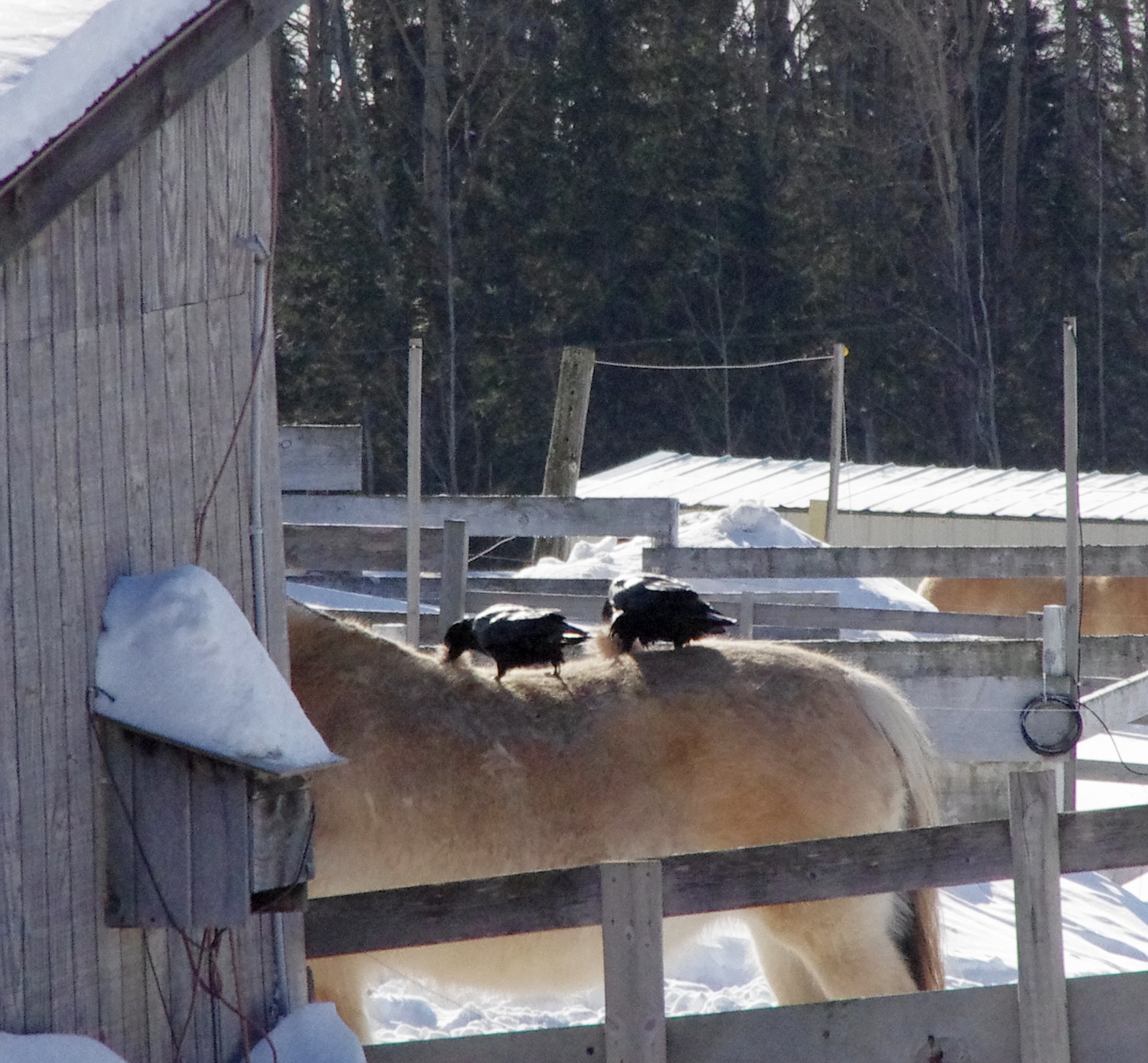 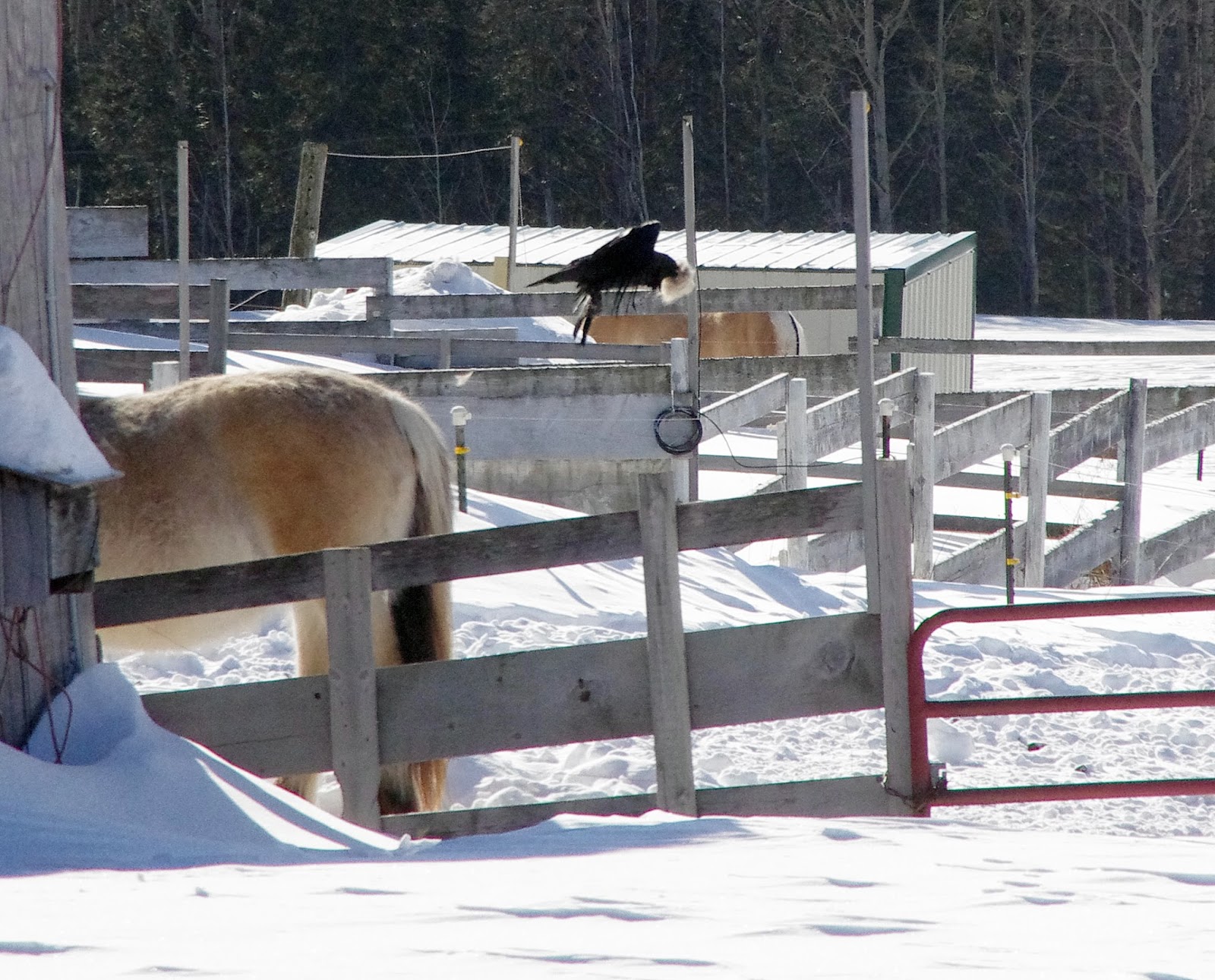 I apologize for the picture quality as I didn't have a long lens and I was in a hurry, but you can get the basic gist of what was going on. So now we have  documented evidence of another symbiotic relationship between species. Not that I haven't seen horse hair in bird's nests, but this is the first time I have seen them take it directly from the horse with the horse's approval. ("My name is Vedas and I approve this evidence.")

The big lake has nearly frozen entirely which doesn't happen very often. This is what it looks like on the way to work. 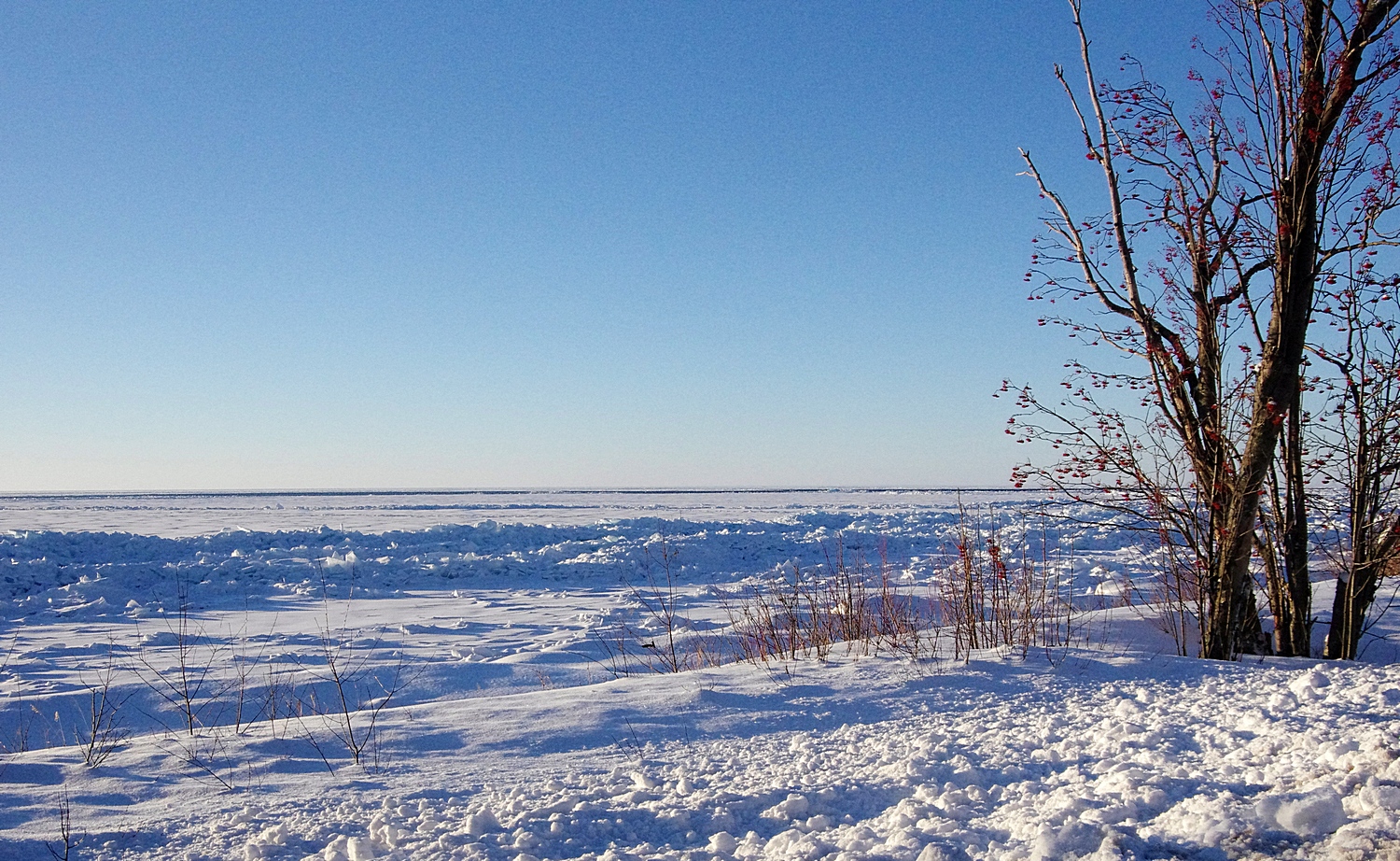 I like the way the Mountain Ash berries stay so red. They are a food source for a lot of birds, but I have never tried one. At these temperatures I would probably break a tooth if I did. 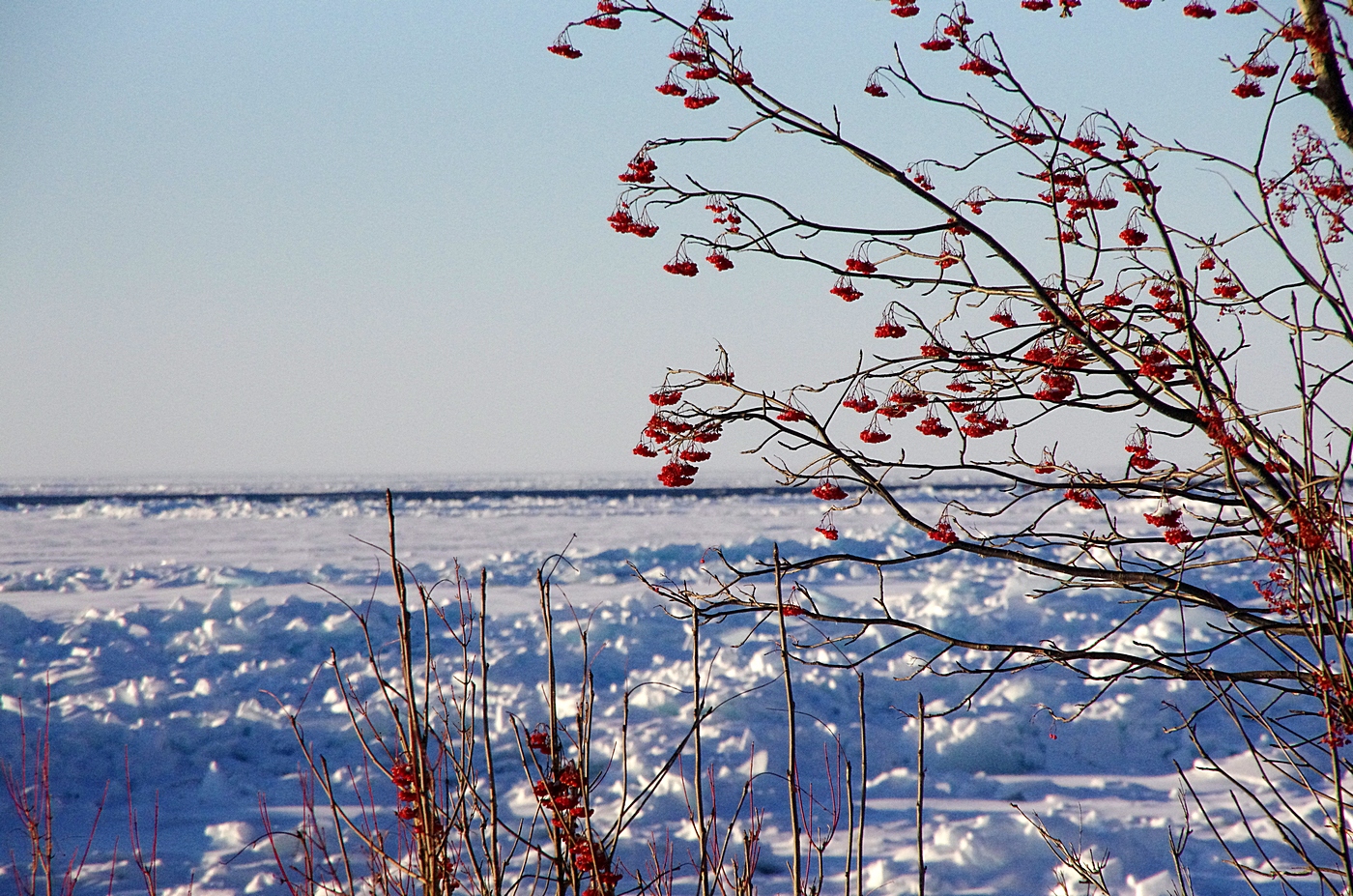 A few days ago it warmed up enough to snow. When I got to work it looked like icing on a cake when I looked up at the hills across highway 61. The humidity had made things a bit frosty to add to the effect. 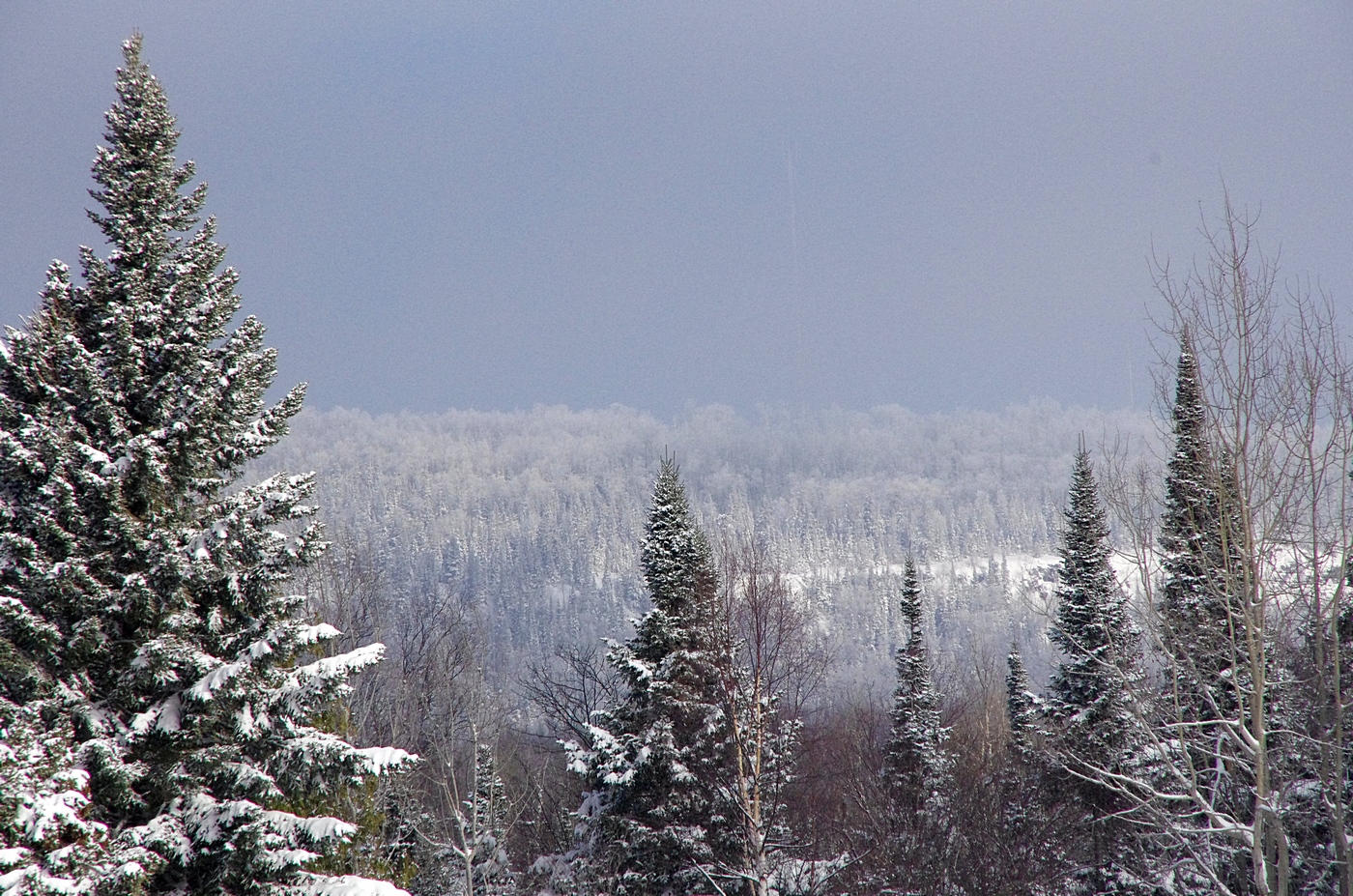 But all good things must come to an end. By the end of this week it might warm up to freezing and the melting process will begin. Will we have epic flooding or will it be a gradual melting, refreezing, more snowing, occasional raining kind of spring? I would guess the latter, but I'm not in charge so I guess we'll just have to wait and see.