The Cooker and the Roomie went traveling today with a friend. It's an international shopping trip to Thunder Bay, Ontario. I don't know (and probably don't want to) what they do up there, but they obviously have a good time and come back tired carrying exotic Canadian goods. Maybe they'll bring me some Tim Horton donuts. This leaves me a day to call my own, so after making some pancakes and topping them with some locally brewed maple syrup, I took a quick trip to town. After stopping in at the Senior Center to buy some Christmas cookies in support of our local animal rescue organization I bought the local fish wrap (newspaper) to bring home and read. It promptly put me to sleep and into dreamland. When I woke up there were some images of my pre-adulthood floating around in my head and I thought I might share some of those images. This is the man who I named this blog after. He is in his mid forties in this shot. 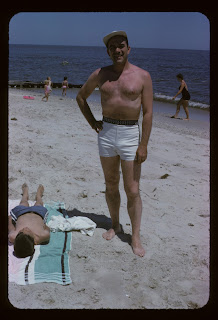 This is back in the mid sixties. Of course we all looked pretty good then. Even me! 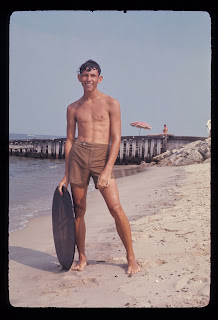 Ah, those days of summer past. I must have spent ten or twelve summers at the beach. I forgot to mention that this is on the Delaware Bay, just inside the Atlantic Ocean. So how many of you have actually met someone from Delaware? I spent the first eighteen years of my life there before heading for the center of the continent. I lost my accent pretty quickly so that I would blend in and the locals couldn't tell I was practically an alien. Although when people got to know me they did start to question my planet of origin. I still refuse to tell.

The people at the beach had a pretty good handle on the art of doing nothing. Of course, you must realize that one income was usually enough to take care of a family back then. Sometimes someone would pick up a seasonal or part time job to have a little "mad money", but it wasn't necessary for survival among the working class. Here is a typical weekend afternoon. 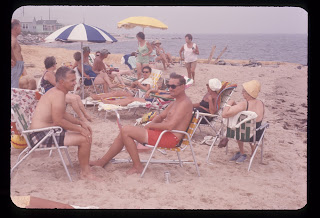 Well it sounds like the girls are home so I better make up some story about all the things I got done while they were gone. I know they won't believe me, but why should they? They always appreciate a good story no matter how much embellishment occurs.
Posted by Jono at 4:12 PM