The holidays are about over for now and it has been cold. How cold? It was so cold that Pamela Anderson was downgraded from "hot" to "tepid". Football fans were actually ordering hot chocolate at the games. Scotsman started wearing pants. I used the snowblower on the floors instead of the vacuum this week.

Really, it wasn't all that cold. About -22F (-30C) was it, but the winds would howl for a couple of days at a time which really did hurt any exposed skin. As little was exposed as possible, but we still had to feed the horses, make sure they had water, and put them in the barn at night which entails cleaning it up the next day and getting it ready again. That meant being outside for an hour or two each day.

The birds at the feeders were pretty well fluffed up to stay warm. Here is a chickadee with a fluffed up look in order to better insulate against the elements. 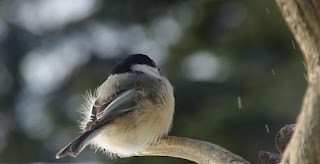 The lake is still open as long as the surface stays above freezing. The cold, dry air forces evaporation into a roiling cloud of steam that looks like this. 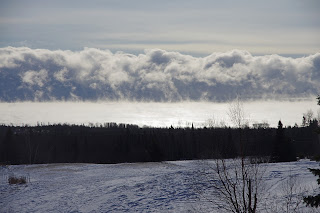 When the temperature is about 10F the steam rises much more slowly and nearby ships are still easily visible. 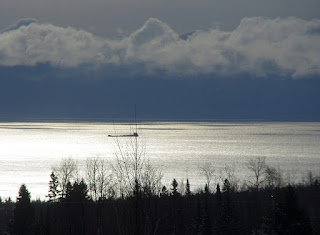 Shipping season won't end for a couple of weeks yet, but the ships going by on the really cold days  take on a ghostly appearance when cruising through the steam.

Hopefully, at some point this month it will get above freezing for a couple of days before taking the plunge back down. The days are getting longer now and tomorrow night is a full moon, known as the wolf moon to the indigenous people here. The meaning can go either way to determine if it is a good thing or not. I'll let you all do that research if you wish to. 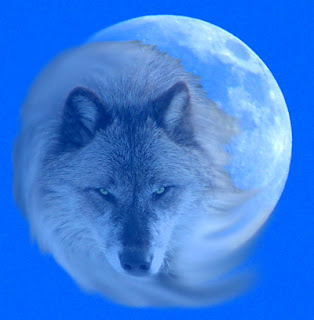 I haven't seen or heard much of the local wolves for a bit, but lately I have had little desire to stand outside listening for any length of time or going for a hike to look for tracks. Maybe when it warms up a little.

Then there is the calendar issue. I was finally getting pretty good at knowing and writing 2017 correctly and consistently when all of a sudden they go and change it again. It takes me a little longer each year to get used to it and practice until I get it right and then it changes once again. I wish they could just pick a year and stay with it, but no, they can't put all those calendar makers out of work. That must be the reason, right? What else could it be? Maybe someone smarter than me could figure out a compromise.