News from our local "fishwrap" comes out weekly so most of the news is at least a few days old, but it is still news to most of us unless you hang out with the morning coffee guys at Buck's Hardware or the Superamerica station. Here is a brief synopsis (is that redundant?) of some stories from the Cook County News Herald.

There is a front page story this week about a meeting at the Hovland (population 272) town hall. The story starts out with, " The inside of a Siberian snowball is warmer than the Hovland town hall was on Thursday, November 9th." The blower on the furnace of the uninsulated structure had to be shut down because the blower was too loud to hear the speakers. It was 8F outside and the building cooled rapidly. The main topic of discussion was to determine what, if anything, should be done to save the crumbling Hovland dock. The dock was a hub of community activity after it was built in 1905. The general consensus was to leave it alone rather than gussy it up as a potential tourist attraction which may in turn become an attractive nuisance.

The Grand Marais Municipal Liquor store was quite profitable in 2016 with total sales of $344.4 million. How could a county of just over 5000 people drink so much? That is over $67,000 for every man, woman, and child that reside here and the average income is less than $37,000 per year. We must have a hell of an influx of summer residents and tourists and all they must do for entertainment is drink!

*Dateline: Later. The 344 million is for the entire state of Minnesota. Out local muni did 2.1 million with a $300 and some thousand profit. No wonder the numbers seemed impossible! That is only $420 for every man, woman, and child. Still, a $420 per year booze allowance for a child is a bad sign.  I stand self-corrected.

The Down Memory Lane column is one of my favorites. Since I remember some of the news from 10 and 20 years ago the more interesting perspectives are from 50 and 90 years ago. From 50 years ago, "A color television disappeared from the lobby at the Lutsen Resort last Friday evening. It was the evening before hunting season and there were a considerable number of people about. A night watchman was also on duty." It is my recollection that color television sets of that era were pretty big and hefty and I'll bet that the municipal liquor store was probably having a good year.

From 90 years ago we have these tidbits. "Helen Hedstrom sprained her thumb in physical education last Tuesday morning." Also, " H.O. Toftey has resigned his position as highway maintenance man at Tofte and is now fishing." Finally, "A man from Creech's camp was examined today before Judge A.V. Johnson as to his sanity and found to be insane." Was it the judge's turn to be examined next?

The leader in Buck's Big Buck contest turned in a deer that weighed 275 pounds dressed. That is a very large dead deer. Typically up here there are as many deer taken with vehicles as there are with guns and bows.

Not much of interest in the "Law Enforcement briefs." Mostly dead deer in the road, cell phone misdials, traffic stop warnings given, and lost hunters.

It looks like Joyne's Ben Franklin is having a 20% off sale for Black Friday. Hopefully, more than last summer's leftover clothing will be on sale.

It is early winter now and the skies have taken on "that look" they get as the days shorten. Click to embiggen. 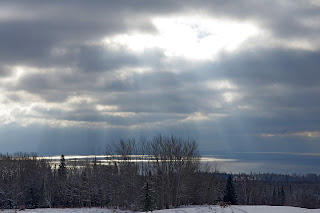