Meanwhile, back on the farm...

While the weather does its yo-yo into spring thing with alternating nice days and some not so nice days, nature in general moves on. Yesterday we had snow flurries several times, but by next weekend we may hit 70F. You never get totally used to it. The shipping season is in full swing with freight, iron ore, and grain moving throughout the area.

The building season is getting started in earnest now that the spring weight restrictions are coming off the roads and things are getting very busy at work. We still have a moment of silliness now and then when one of our builders brought his daughters by after school. This one wanted to sit with Pinky so who are we to say no when she asked so nicely. 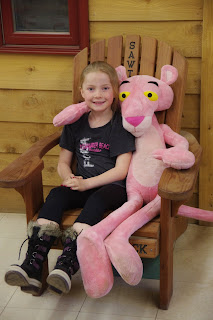 Gravity does funny things to his feet.

With the constantly changing weather we sometimes get fog. Being 600 feet above the lake we sometimes get to see the line between conditions. Sometimes it is a weather front or just an atmospheric thermocline, but from here we get different perspectives.  This time it was warmer air over the cooler lake. 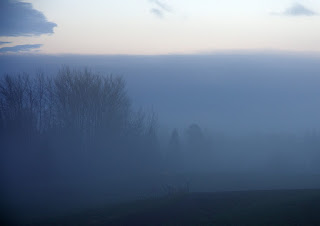 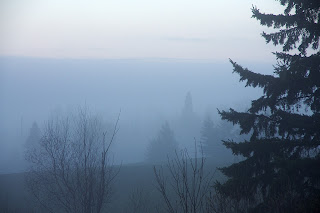 Sometimes we can see the lake "breathe".

The birds are nesting and fighting for territory. Today there were a bunch of blue jays making a lot of noise, when suddenly there was a commotion and change in the noise. A Cooper's Hawk had swooped down on their party and got one. Here it is mantling at the edge of the yard. You can see blue jay wings protruding out from under it. 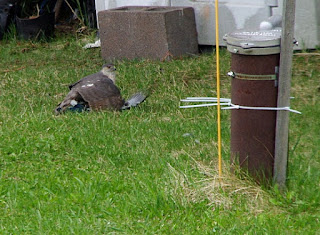 A bit gruesome, perhaps, but the hawk has a family to feed, also. It is just that we see a bit of raw nature being this far from civilization and at the edge of the boreal forest.

With the grass starting to grow everything that grazes is interested in grazing and getting along. Deer carry diseases and parasites that very adversely effect the moose population. So far there doesn't seem to be any harm being done to the horses. Maybe they are developing a cross species friendship. 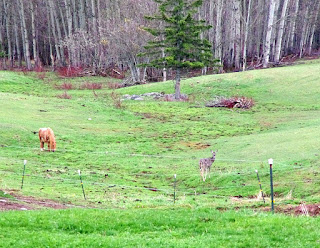 Let's graze together and be friends seems to be the theme lately. It's okay with me.