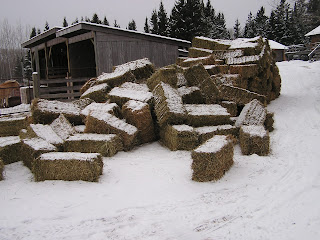 It was a busy weekend here. I got a load of hay, about 7 tons or 230 bales. The doctor still won't let me deal with that much lifting so I recruited some help. I really dislike having to ask people to help me do something I normally do myself, but it was an awesome half dozen friends that put it away. It takes me a couple of days to move it and stack it, but it took them less than an hour.
I often look out our kitchen window at first light to see if there is anything down by the creek. Usually I see a deer, grouse, squirrel, or fox, but occasionally something different. I couldn't see what it was, but it wasn't moving. It was this; some deer hide and a deer leg. 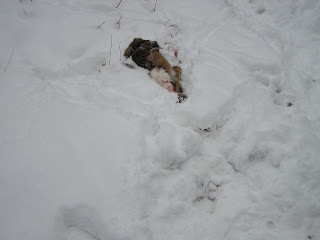 Stitch and I followed the tracks about 30 feet through the brush to the creek bed and saw this: 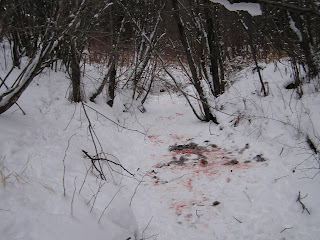 It happened early Sunday morning, but we didn't hear a thing. We back tracked and found where the deer was taken down just below the old farm house. It looked like an ambush when we widened our search area following the wolf and deer tracks. Later in the afternoon I heard a couple of howls down the road a piece. It is wolf mating season about now so people need to keep their pets under close surveillance or risk losing them. It usually happens a couple of times a winter. The wolves have never bothered the horses. Once I was standing with our big mare as she and I watched a wolf trot up the road minding his own business. The mare just glared at the wolf until it went back into the woods. One set of tracks from this incident goes by the house about 30 feet away. Of course the SD card from the critter cam was in the house and any activity at night was missed. I put it back in the camera and hope that something comes by to check out the scene of the feast. I'll post something if it gets interesting.